My brother’s dog Hunter is a very smart Springer Spaniel. 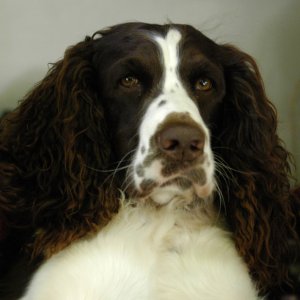 He has an amazing range of expression that he uses to communicate with his humans. Watching him get his needs met,

I realized that his only effective means of getting his point across was through enthusiasm. He leaps straight up about 3 feet in the air when he really wants something. He lifts his front half and breathes hard when we ask the question he wants us to (you want a drink? you want to go outside?). 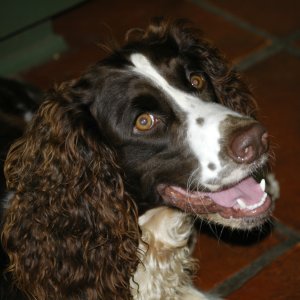 He stares intently without distraction at whatever he wants thrown. He gets our attention with one paw, and then ears raised and breath held, he waits for the right question. He wiggles all over and wags his tail when you arrive at the door. My favorite is how he will ignore you and go limp (and very difficult to move) when he doesn’t want to get out of your sleeping spot.

So maybe there are a few ingredients to this dog language besides enthusiasm, but the main thing Hunter does is use physical expressions of varying amounts of interest to convey his message. I’d like to think that if he had a few words (like the sign-language chimps), he might not be so self-centered.

But isn’t enthusiasm often used in a selfish way? How many people do you know that use enthusiasm to get what they want?

Several years ago I attended a self-expression seminar, and one of the assignments was to tell your group your project with 10 times the enthusiasm. I had a really hard time with this, mostly because I didn’t like my project and I don’t enjoy acting. I was stymied and didn’t know how to proceed. What I found interesting was that the most common method everyone else used was to increase the volume of their voice and the speed of delivery. A few stood on a chair or waved their arms. Mostly it was very loud. I was unconvinced that anyone there had gotten the point of the assignment. Or maybe I should say we learned different lessons.

One thing I learned: for me, fake enthusiasm puts a real damper on things. (!)
Another is that the enthusiasm has to come from something within, and I have a small supply. It was only recently that I realized that I could learn to generate it when needed. I’m still working on that lesson, but at least I have the benefit of knowing an excellent speaker of dog language like Hunter. I’d probably get further faster if I quit using words.

“Wit is the sudden marriage of ideas which before their union were not perceived to have any relation.” — Mark Twain