Text by: Anabell Castañeda
Article found at Yucatan Today Magazine, ‘Editorial’ Dec. 15/Jan 14 2010 – www.yucatantoday.com – a wonderful resource for information on Merida and the Yucatan of Mexico.

Today’s Mayas look ahead to December 2012 as a critical point in the history of humanity; and they see time as a variable which has a great influence on life on this planet and our existence.

Not for a single moment have the Mayas feared the arrival of this date; on the contrary: the ancient Mayas have always told us to wait patiently for a change in consciousness and the evolution which that change will bring. 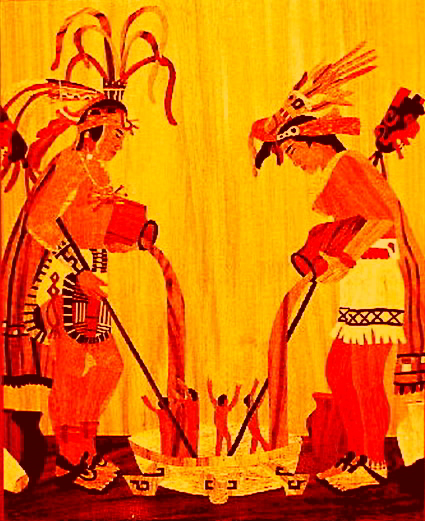 Human beings don’t exist by chance or a work of fate, they are part of a plan to carry out a mission in this part of the universe. Nor is the world totally complete in its creation and perfection; mankind has a job to do on this planet and must be a part of its conservation. It could be said that life on planet Earth depends on humans and what we do during our existence.

The Mayan prophecies announce the change of time. The Popool-Vuh is their book of advice and it tells us: “It is time for a new dawn and to finally complete the task.”

We are at the beginning of the ending of a period of the Sun which lasts 5200 years, culminating with some hours of darkness. After these days of darkness, a new (the sixth) period of the Sun will appear. In each period of the Sun, the planet adjusts, causing changes to the climate, social, and political changes. The world, and life, both transform, and we enter a period of understanding, of living together in harmony, and of social justice and equality for all; there is a new way of living. When there is a new social order there is a new kind of freedom, a time when we will walk like the clouds, without limits and without borders; we will travel like the birds, with no need for passports; we will flow like the rivers, all toward the same place, the same goal.

The Popool Vuh tells us that there have been three eras: the era of the gods, the era of the heroes, and the era of mankind with an increase in decline. But what does all this mean? It means that within the Mayan prophecies, we can see a return to power. The interesting thing is that within this long-awaited change, it is also expected that there will be a reawakening of the Mayan world in all its complexity, with an appearance of the ascending Mayan spirits who will come to bring the people back up. We will fulfill the famous phrase “that no one will be left behind” and also that “we always return to where we came from”. This means that we are facing great changes, great powers which never have been seen on the face of the earth.

We have an opportunity to experience a change of conscience which will help us to evolve as a species, protecting the natural resources which we need for our survival, and bring about the long-awaited, urgent social equity, finally understanding the importance of the human being in the universal order.

We will wake up in the conscience of change.

“All you need is ignorance and confidence and the success is sure.” — Mark Twain