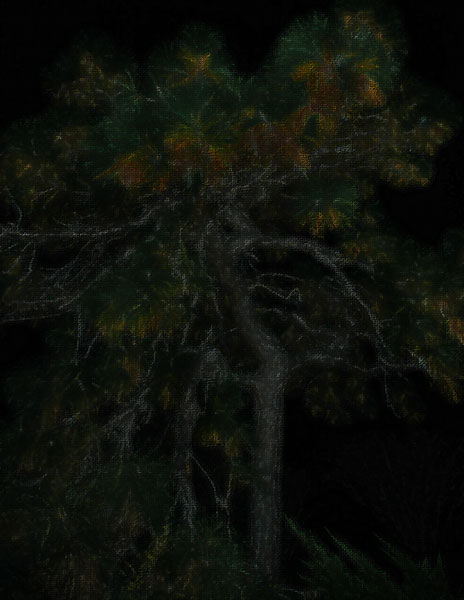 With window open rain fell as if the night sky was playing a piece from its most loved composer, a master piece. The percussionist was at her best. I don’t believe I have ever heard thunder roll for so long and so magnificently. The long last ending seemed to rattle the window one last time after it had settled from the beginning.

In the morning hours, from the same window of this upstairs bedroom that is mine, for now, I have seen a most beautiful pheasant (which I have never seen wild before) picking among bright red mushrooms that have sprouted through thick pine needles fallen from, as it looks to me, an enchanted old pine tree.

Another night I was awakened deep in the night numerous times to the sound of a howling wolf. Dogs living close would bark lowly as if a bit fearful but still doing their job even if only cautiously.

This window stays open every night that I am here. Most nights are so quiet. I am not used to quiet, having lived close to streets busy ’til late hours. Out here everyone is in their house. That is all there is out here in the woods of this northwest Florida neighborhood.

Often though, that quiet is broken by bombing and strange rapid gunfire from the practice range not far enough away. I imagine: do they realize it is to tear flesh, shatter bones and splatter blood of people. People like you and me. Yes, some are our ‘enemies’, many just innocent victims of warfare. Bombs don’t discriminate.

But on this rainy night, nature rules and all are in shelter from her glory and might and I am lulled back to sleep.

“The educated Southerner has no use for an ‘R’, except at the beginning of a word.” — Mark Twain