One can’t help but notice the differences between life in Oaxaca and life in Houston, Texas.
New for me is being taller than a lot of people. Since I’m only 5 foot 3, I’m used to looking up to talk to people. I seem to be a good 4 inches taller than most women here, and a lot of the men are not much taller. Also most women wear shoes with heels, so they are actually even shorter.

The Mexican coins are thick and very similar to each other. Even experienced store clerks have to examine them carefully to get the correct change. The bus drivers, however, are so talented that they can maneuver in traffic, shift gears, and make change at the same time.

But the coins seem to be preferred over paper bills.
If you drop some coins, they make a dull thud sound, unlike the jingle of US money. I lined the US money up with the coins that are equivalent value. The nickel and the 1 peso coin are the same size and thickness.

I’ve heard that family is very important to the Mexican culture. I’ve also seen that they like a parade and seem to have them quite often. One day we saw these two concepts come together in the form of a short parade in honor of “La Familia”. Here you can see how dense the people were as they came around the corner of the zócalo. They were quite loud too, as there was a band, and several groups chanting something.
One of the strange things was that the band was repeatedly playing the tune of “Deep in the Heart of Texas”. 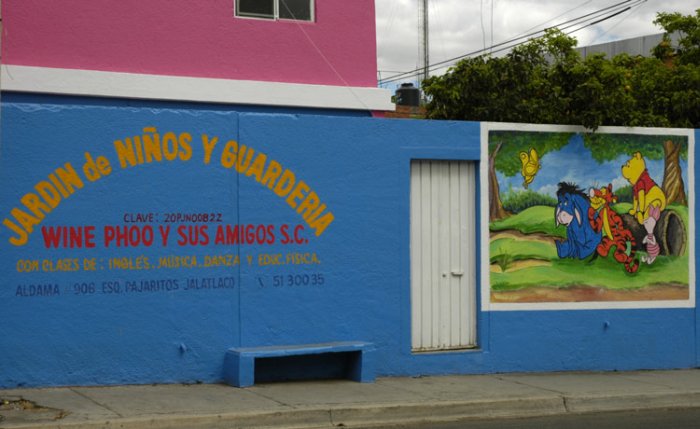 I’m not sure what to make of this pre-school. They say they teach classes in English, among other things. The Pooh characters can be found in many stores, spelled correctly, so what are these guys trying to say?
The telephone is an important thing here. We’ve heard stories about the difficulty in getting phone service, and we’ve seen lines of people waiting for something at the phone company office. 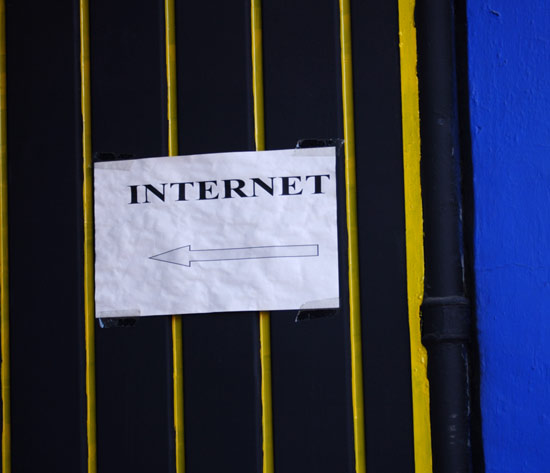 If everyone had a phone, I don’t think we’d see so many cell phones, public pay phones, and storefronts for making phone calls.
A lot of the people with cell phones are busily pushing buttons — sending text messages instead of calling. Phone calls are not cheap here, but that doesn’t stop people from making them.
One thing that looks odd to me is the sign announcing where the internet is. Of course they mean that they are running an internet cafe, but it doesn’t look like that from the sign.
When crossing a street, extra care is necessary so that you don’t get run over. Just standing too close to the street on the corner can be dangerous since turning cars and buses often clip the corner as they turn. I saw a bus trying to make a tight turn into a small street. It’s a good thing that the telephone pole was cut off level with the sidewalk, because the bus ran right over it.The parking along the street is tight, as is the space for a car to enter a private driveway. Drivers have to know exactly where their car’s edges are since there is often only 4 inches leeway on a side.The license plates on cars are often a bit crumpled, due to the nudging of other cars when parking. Almost all of the streets in the central part of Oaxaca are one-way streets, which is handy for pedestrians. A lot of streets end up with one lane of parked cars, several cars double-parked, and whatever room is left for cars to drive on.The traffic lights are small and located on a pole on one of the street corners. This makes it difficult for the pedestrians to see, and you can’t always count on the drivers abiding by the light anyway.

Safety does not appear to be an issue here. At the library one day, two men were spot welding individual bars over several of the windows. Neither man wore eye protection. We wondered how they could even see. As we left, we saw the thin electric cord for the welder was wrapped to a wire bypassing the meter. It was hanging down at about eye level and only a few inches from the metal gate of the entrance. I hope nobody leaned on the gate that day.

The sidewalks are quite an adventure. In a city of many pedestrians, I would think they would pay more attention to the sidewalks. There are often big holes, broken cement, piles of rubble, upright bolts for missing light poles, dips and slants and steps, trees, and drainage paths. That’s just where you put your feet.

Some are very narrow (down to about a foot). Then there are obstacles such as window ledges and bars sticking out, wires hanging down, cars inches away, and people to dodge (those walking, those begging, and those selling something). The other day, we had to step into the street to let a burro pass by as it trotted toward us. As a visitor, you want to look around as you walk, but you can get into trouble doing that, although I watched where I was walking a few days ago and found a 200 peso bill.

We once found ourselves in a dead-end street, but I saw some steps leading up. The first half led to a drop-off (no landing) at which you had to turn 90 degrees to go up the 2nd half, which narrowed down to about a foot and a half wide. Then at the top, there was a railing for the street above in the way of the stairs. Only a skinny person could get through.

The air on the streets is full of exhaust, especially from the buses. The people don’t seem to mind. The other day at the apartment, the driver for the landlady’s sister loaded up a pickup with buckets of water and then started the truck and walked off to open the gate and who knows what else. He left the truck idling there for several minutes as it pumped exhaust right at our windows. He seemed unconcerned. We wondered how the people below us could breathe at all. 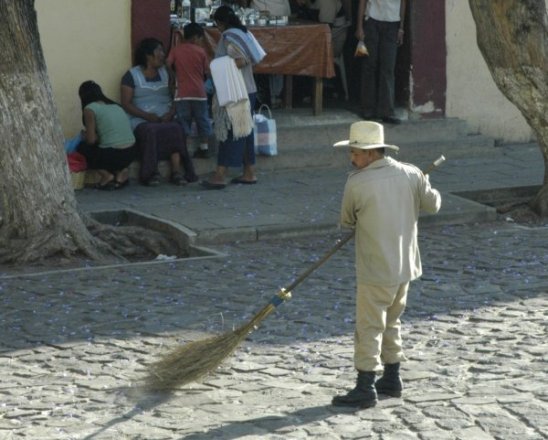 There are lots of city workers that trudge around the central part of town all day picking up trash and sweeping streets and sidewalks. I thought they could use better equipment, but actually these brooms do a pretty good job. It leaves the dirt intact, but pushes along the bigger stuff.
A lot of store owners make it part of the morning routine to scrub the sidewalk in front of their store. This practice still leaves a lot of sidewalk unattended, though. 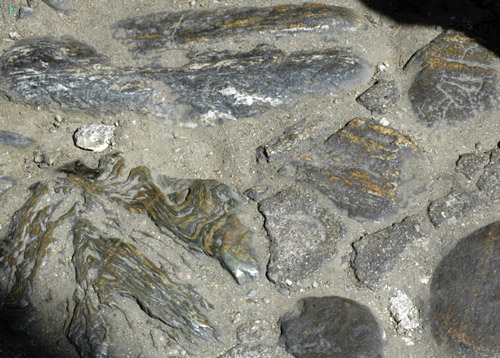 Some of these streets are very old, but it looks as though it does not matter what the building material is, it is just used.
Here is what looks to me like petrified wood in a normal side street.

There are a lot of cars here, but we don’t use them. That means we do a lot of walking, and carry everything that we buy, and so are limited in what we take home in one trip. We haven’t quite got the hang of the traditional method of carrying yet, though.
Maybe that’s why the women are short?!

“Good friends, good books and a sleepy conscience: this is the ideal life.” — Mark Twain