Last night we made our way to the zócalo to see what was going on. There was a band on the bandstand playing very nice music, and some people were dancing, encouraged by an old man that would speak between songs and dance by himself as he played the sticks. It was very pleasant, but the benches are not very comfortable, so we wandered around. We came to the big palace building which occupies one end of the square and is now (since March) a museum. It looked like the man at the door was only letting in a small group of people. Steve got in line and went inside, while I stayed outside to hear the music. He called me over shortly, because they were about to start a jazz concert inside, as part of the “Humánitas fiestas de mayo” they are having.

Let me tell you, a palace is a big and open space for a concert, but it has terrible acoustics as the sound bounces off the marble floor and the cement walls. A woman made an announcement, but I couldn’t understand a word because of the echo. The people around me didn’t seem to notice, and then I remembered that Mexican radio always echoes. Anyway, we listened to only two songs before we had enough and headed for the door. Now the man at the door was trying to keep people out, and didn’t want to open the door for us. I didn’t care what problems he had, I reached out and removed the big chain and opened the door. No one was going to keep me prisoner in a palace!

Now the band outside was all done, so we headed across the square.
We saw our friend Clemente talking to a gringo and stopped to talk. The man was from Dallas and had lived in Oaxaca for 5 years. His theory is that the Mexican culture lacks precision, and everything that people like about Mexico is the fun that comes from a lack of precision. But he was finding that everything he doesn’t like about Mexico is also the lack of precision. He says he appreciates the US more, and that Texas is a lot greener than Oaxaca.
He also told us how to get to the big park on the north side, since he lives right next to it.

It sounded easy: take a bus to San Felipe de Agua and get off at the end of the line there. The entrance to the park will be right there, but they don’t let people in anymore (there was a fire a few months ago) so go down the road to the east, past the soccer field, and the last house is yellow which is his. So off we went this morning and after a wait, we found a bus to San Felipe. It was the same as most, traveling on the busier streets, but as it got further north, it seemed that there was not much choice of road.
We were on a small cobblestone road for quite a while, which is a bit uncomfortable on a bus. As we got to a wide place where some other buses were turning, I started to wonder. We went on an even smaller road, made of dirt, just on the edge of the hill. It wound around and came across the other side and here the bus stopped. 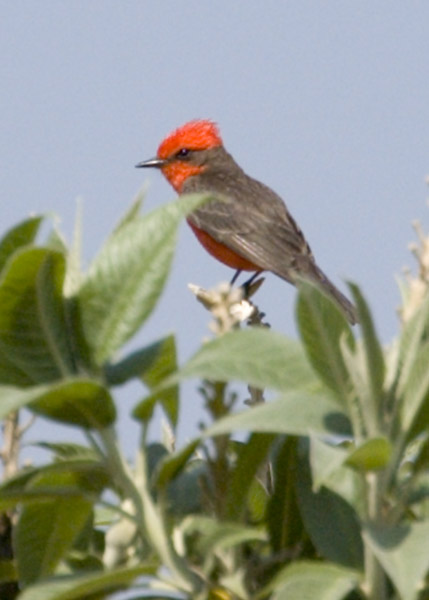 Well, it didn’t look anything like either of us expected. We were at the north end of a road under construction, and all around was dry, run-down neighborhood. We decided to walk downhill where the man Steve asked had directed us.

We found this bird in the top of a tree about 30 feet away. Steve walked toward him to get a better shot, but he flew off. He didn’t want to leave and circled back, flying slowly, and almost in a hover mode. 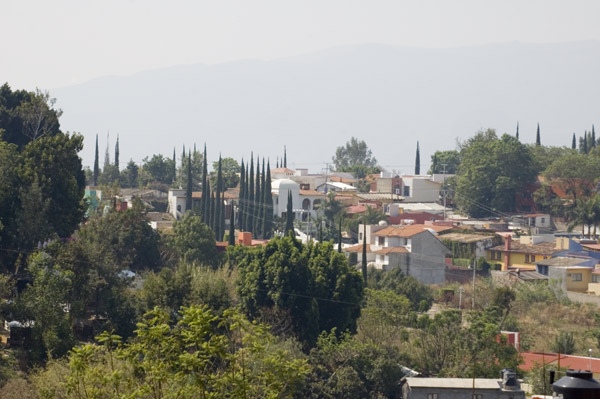 Here’s what we saw as we went downhill. It doesn’t look like a park to me. 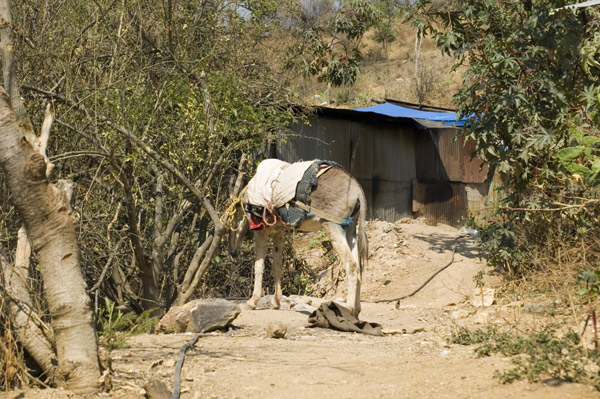 What a contrast to the previous picture, but it was taken at about the same spot. 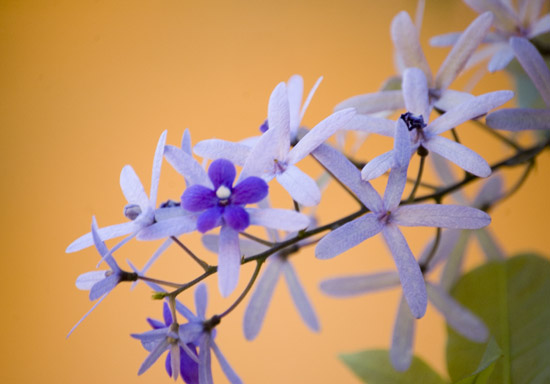 There were beautiful flowers on a vine spilling over a wall. There are more plants visible from the street here than in the city center. 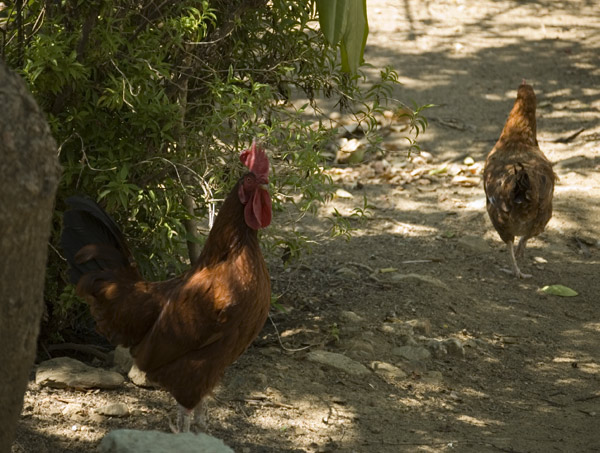 This part of town is a bit rural. 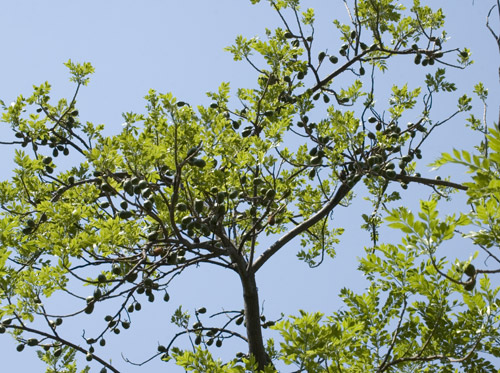 This is a big tree with what looks like a fruit all over it. 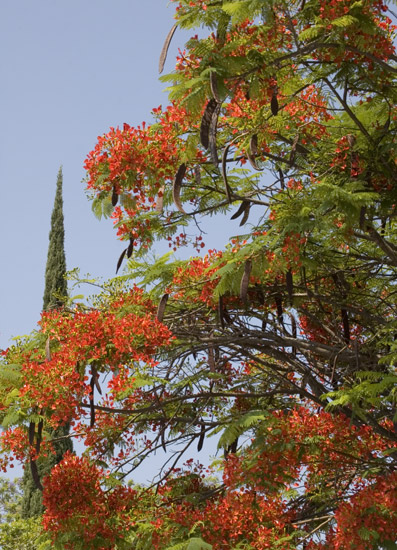 These trees are everywhere, and so bright! The seed cases are up to a foot long. 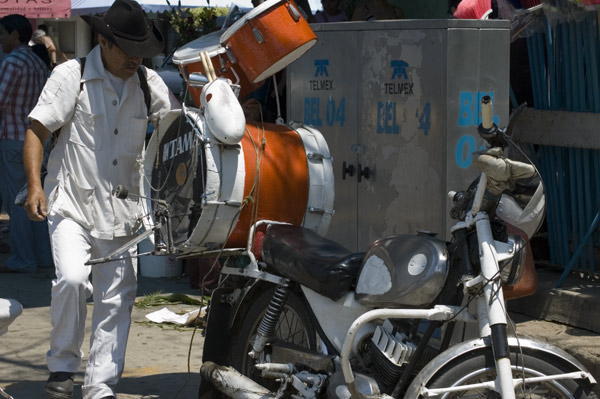 We never did find the park. We caught a bus going back south, and decided to visit the market where Estela sells bread every day. After walking the “3” blocks (more like 5) as she instructed, we found it, with this man outside. I guess he’s a traveling drum player. 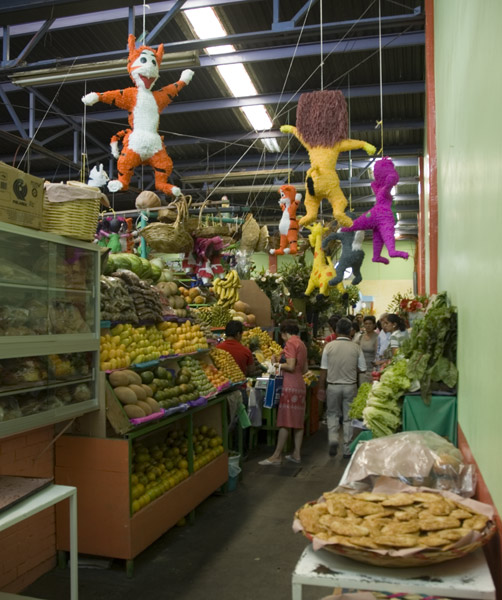 Here is inside the market. 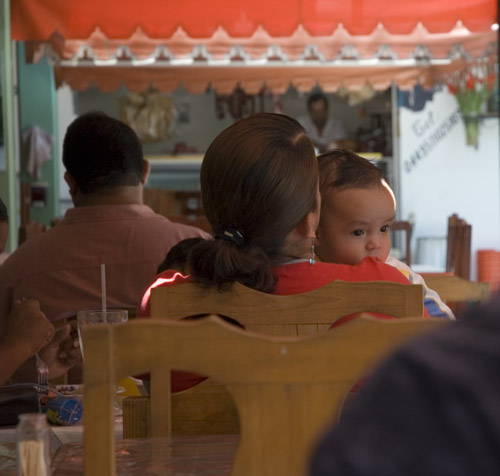 Steve had some caldo de res for lunch before we headed on home. It is Mother’s Day here. I wonder if this little one knows that.

“Obscenity is a cleansing process, whereas pornography only adds to the murk.” — Henry Miller