I decided to make a rag rug out of old T-shirts, sewn on a base of a large towel from Steve’s father’s estate. I thought it might be a little boring if I just sewed them straight across the short side, so I drew this curved design on it with a marker.

Here I have sewn the first few strips onto the towel. I didn’t plan very well, since I used the brown in the middle which needs a long strip but it came from one of the smaller shirts. 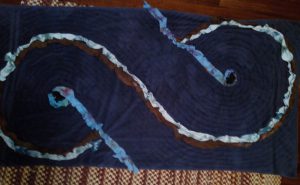 I finally got strips sewn onto all the original lines. It took some work to keep things symmetrical since there was less of some colors. However, the lines were drawn about 1 inch apart and so it seemed a bit sparse. 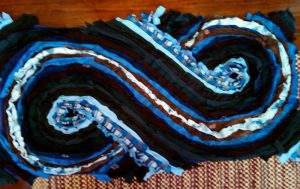 So, I decided to add another strip in between each of the original strips, still keeping things symmetrical. Sewing between the existing strips was a lot more work. Having to use the colors that remained made it look a bit messy since they weren’t long enough to go all the way around. 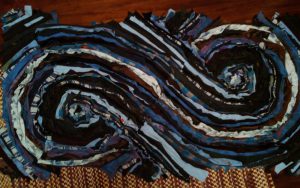 With all the strips sewn, it was time to start cutting them. Here is the rug with half of the strips cut. 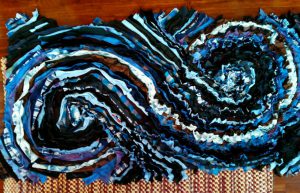 I chose to cut the strips so the cuts alternated with the strip next to it. This means I had to cut them individually instead of multiple at one time. My thumb bone was sore from opening the scissors for the cuts. 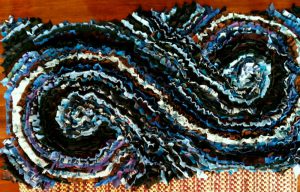 “It does me good to write a letter which is not a response to a demand, a gratuitous letter, so to speak, which has accumulated in me like the waters of a reservoir.” — Henry Miller