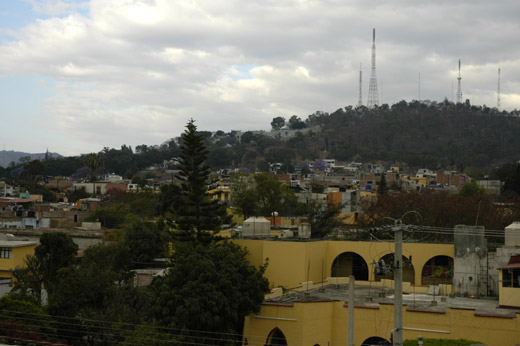 From several places in town, we could see that there is a big stadium of some sort on the side of the closest hill to the west. This is the view from our 3rd hotel one cloudy morning. 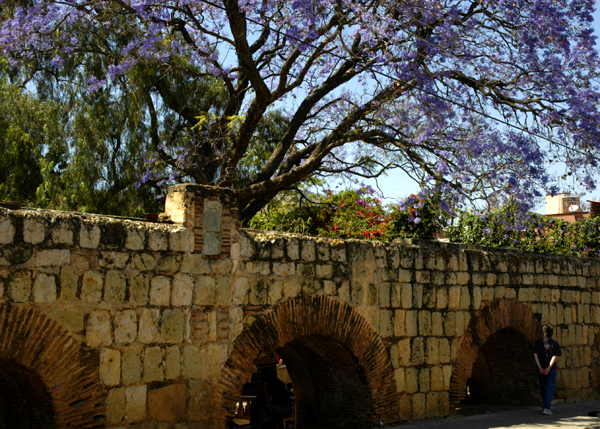 We wanted to find the bakery with the apartment we wanted, and also explore the west part of town where we hadn’t been yet. Just one block over and two south, we came across the old aqueduct that we had heard about. It is no longer used for water, but makes a dandy wall. 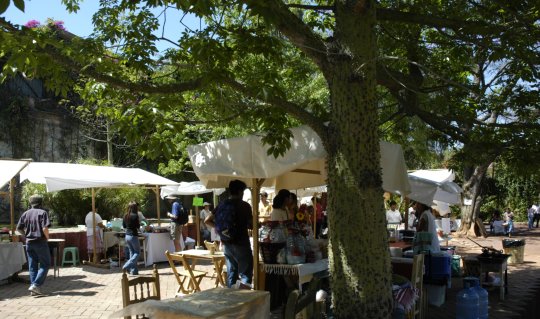 Behind the wall we discovered a beautiful space filled with big trees and an organic market. We learned later that this market is only here on Fridays and Saturdays.
I think the old woman at the entrance said something about us when Steve told her he might buy her bread later.

The area near the market was indistinguishable from the rest of town, except that it was more hilly and harder to walk. We went several more blocks west until we saw a big street 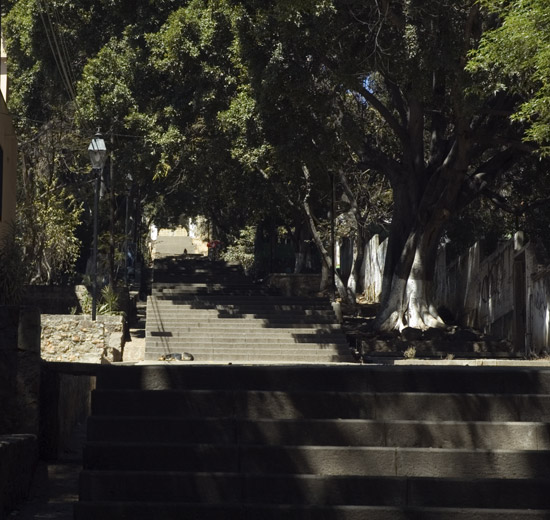 Looking across, there was a long line of trees going up, and a new thing: we could see the space between the front gate and the big building across from us because it was built on a hill. I think it is a school of some sort because of the student types loitering around the entrance. We went toward the trees, which are huge, and found that there are stairs all the way up the hill.

Well, of course we had to go up!
We went up a few and tried to capture the immensity in a picture. That little lump you see at the top of the tree shadow is a person. We got very tired, but once we started, it seemed silly not to go see what lay at the other end. 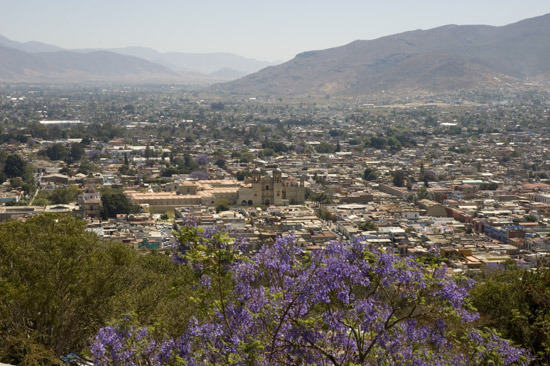 At the top of the stairs there is a short tunnel under the road and then a few more steps up to the entrance to the stadium. This is the view from there.
Our hotel is about 4 blocks to the left of the big church (Santo Domingo). 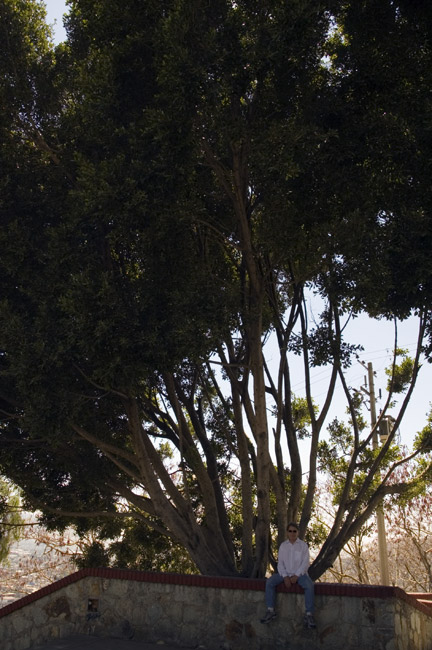 We rested a bit before exploring further upwards. There were several gringos coming down from above the stadium, as if from extended mountain hikes. They looked quite fresh somehow. We figured they’ve been here longer enough to be acclimatized to the altitude and a steady dose of walking. We are getting there slowly.The trees are really big.There were some workers erecting a statue at the edge of the hill behind Steve. We can see it from the town now. 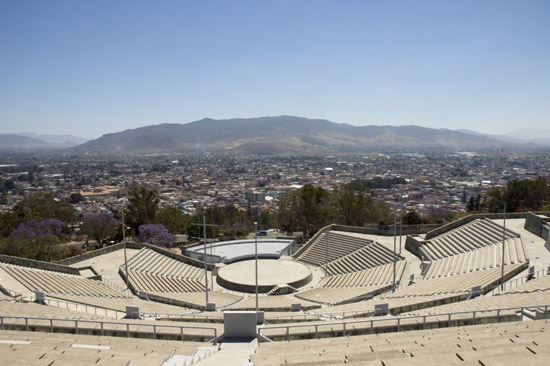 All the way up, this is what we saw looking east toward the town’s center.
The big blob of trees just to the right of center is the zócalo. 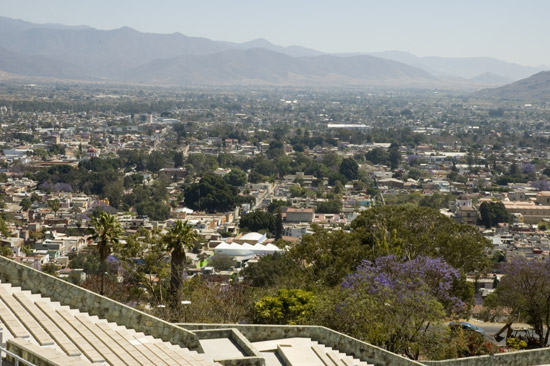 The city extends toward the north as far as you can see. The map of the historic center ends about 6 blocks north of the big church that is on the right edge here. 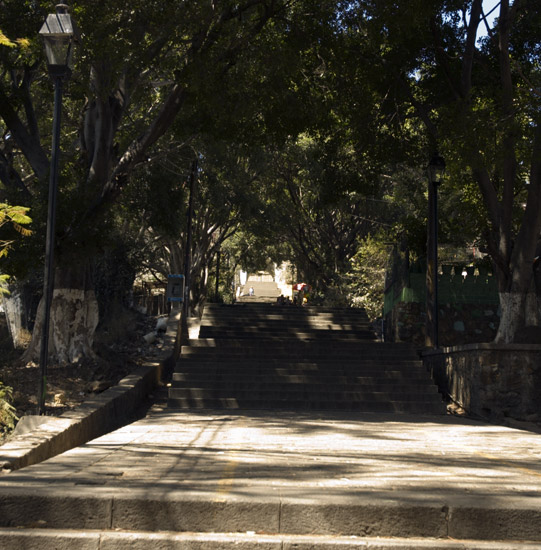 Going up took a lot of work, but going down gets different muscles working. Once again, we tried to capture the immense number of steps. We made our way home and took a much needed rest. 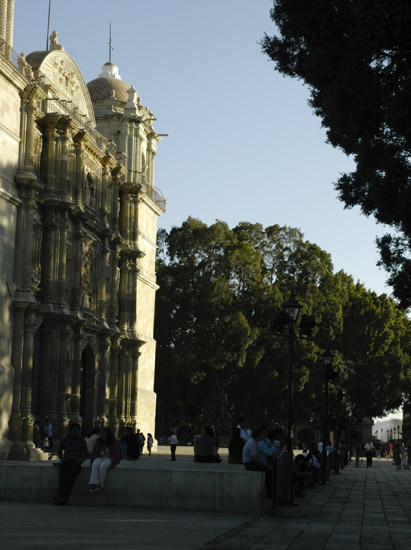 We ventured out later to the zócalo to see what was happening. You can see why the trees are visible from so far up. They are really tall. 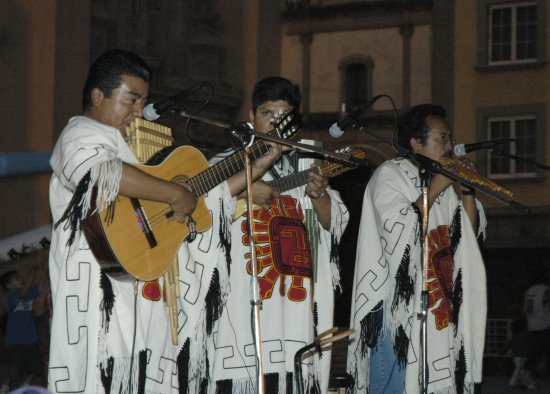 These guys are very talented. They play pipes and guitar at the same time (different notes), and it is very fast music. 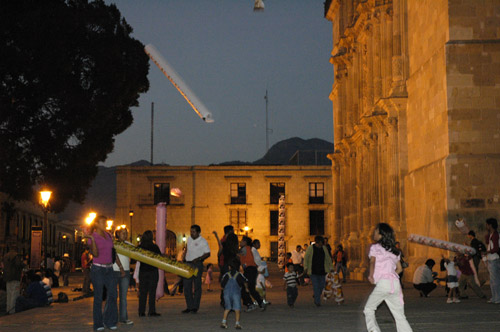 Everyone was having fun. 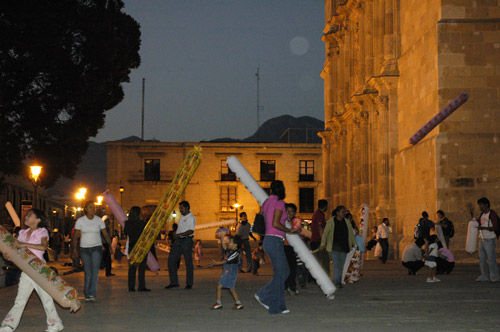 “The man who is forever disturbed about the condition of humanity either has no problems of his own or has refused to face them.” — Henry Miller